Today, I’m bringing you one of the easiest yet tastiest steak recipes out there
London Broil is the perfect easy, affordable, hand’s-off dinner whether for weeknights or special occasions.it is marinated juicy, flavorful, buttery tender steak that takes minutes to broil in the oven .The spectacular London Broil marinade is made with soy sauce, balsamic vinegar, lemon juice, brown sugar and seasonings that infuse the steak with complex tangy, sweet and savory notes. To make this London Broil recipe, simply marinate the steak and broil – that’s it for a melt-in-your-mouth steak dinner every time – with almost ZERO cleanup!

WHAT IS LONDON BROIL?

These days, London Broil seems to be applied to any large, thick steak that’s on the lean side. You’ll often find top sirloin steaks labeled London Broil, for example. But, for this recipe, we’ll stick to tradition and use a flank steak.

To make London Broil, you marinate your flank steak in a flavorful marinade, then broil it under high heat until it’s medium-rare or medium; cooking it any more than that will make the lean flank steak tough, dry, and unappealing.

Then, you let the broiled flank steak rest. Finally, a good London Broil is cut very thinly against the grain. This helps the naturally tough cut of meat to taste tender and juicy, rather than stringy and difficult to eat. The result? Thin, tender, and extremely flavorful slices of perfectly cooked beef.

London broil or flank steak is a tough cut of meat with a relatively mild taste. This type of beef benefits from a tasty marinade with enough acid to tenderize the meat while adding lots of flavor.

What Cut Of Meat Is London Broil?

London broil was originally made exclusively with flank steak, although through the years other cuts of beef like top round steak have been sold with that name.

It is important to know that London broil is actually not a cut of meat but a preparation. Some London Broil recipes are made on the grill, some are obviously broiled and some are pan fried.

HOW TO CUT LONDON BROIL

Flank steak and top round both have dense muscle fibers that that you can see running through the steak in one direction – this is called “the grain.”  It is important to slice the steak across the grain (meaning the opposite direction/perpendicular to the grain) in order to shorten the fibers.  This will ensure your London Broil is melt-in-your mouth tender instead of chewy.

How To Tenderize London Broil

Marinating London Broil helps to tenderize the meat. Marinating is similar to brining. Marinating not only adds flavor, it also adds moisture to the meat, preventing it from drying when cooked. The acidity in the marinate changes the surface texture, making the beef more tender.

Can You Marinate London Broil Too Long

The quick answer is yes. Marinades contain acids like vinegar and citrus juice or enzymes like papaya and mango. If you marinate the meat for too long, the meat will get mushy and tough. Don’t marinate your London Broil for any longer than 8 to 12 hours.

While we’ve gone over many aspects of preparing a London broil, the most important cooking tip to achieve the perfect London broil is the marinade. Skipping the marinade would be a big mistake as it not only adds flavor, but it helps tenderize the meat, which is crucial in preparing a London broil. Without this step, your London broil will be a tough and chewy. And remember to always allow the meat to rest after cooking. Whether it’s from the broiler, oven, grill or stove top, allowing the meat to rest for at least a few minutes before slicing helps to keep the juice in the meat, which means a better, juicier and more delicious steak. 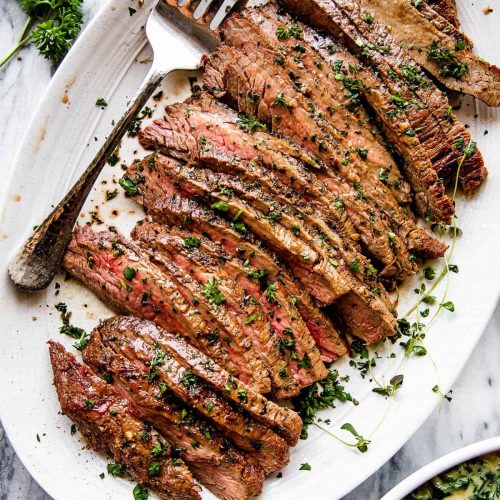 Cooking London Broil might seem a bit tricky, since flank steak can be tough, but you can count on a delicious result if you cook it carefully and follow the right steps. Here are some tips to help you make this dish the best it can be.

HOW TO STORE AND REHEAT STEAK LEFTOVERS

If you have leftover steak, be sure to follow these simple storage and reheating instructions.

CAN I FREEZE MARINATED LONDON BROIL?

Basic quiche recipes-using any garnish of your choice...