Ginger Pork, or what we call Shogayaki I loved it when I was growing up and still enjoy it very much these days. When I miss home, I’d often cook this.

My ginger pork recipe is simply sliced meat with ginger flavoured sauce. Another method of making ginger pork is to use sliced bite sized pieces of pork and sliced onions. The flavour is similar. The latter is almost like a stir fry. In my household, shogayaki was always made without onions.

In some recipes, the pork is marinated in the ginger sauce before sautéing but I don’t do that. The sauce has a strong flavour and the pork is thinly sliced so I don’t think it is necessary to marinate the pork slices in the sauce before cooking them.

I do, however, marinate the pork slices with some sake (Japanese rice wine) and ginger juice for a short while. This is to remove the meat smell as well as tenderizing the meat. But many recipes on the internet don’t marinate the meat before cooking and I think that this could be skipped if preferred.

What is Ginger Pork :

In Japan, this dish is called Shogayaki (生姜焼き). Shoga (生姜) means ginger and yaki means grill or fry. Here, thinly sliced pork is cooked with soy sauce, sake, and mirin along with ginger.

Each family makes their ginger pork slightly different so you’ll find some variations. Some cook it without onion, some make it without any sweetener (no mirin or sugar), some may include garlic, and some may use different cuts of the pork.

The marinade for Shogayaki is super simple with equal parts soy sauce and sake, a half part ginger juice and third part sugar. The resulting sauce is redolent of ginger with a mild sweetness that balances out the saltiness of the soy sauce. I love the way the umami in the sake amplifies the savory goodness of the pork, but this is a marinade that will work well with just about any kind of meat or fish, including lamb, chicken, beef, and cod.

What to Serve with Ginger Pork :

You will notice that ginger pork is usually served with thinly shredded cabbage. You can cut the cabbage into thin slices with a sharp knife, or you can use a cabbage slicer as I do. My mom recommended it years ago and I love it!

I love eating the shredded cabbage with extra ginger sauce from the ginger pork. You can serve it with salad dressing of your choice, such as Japanese Sesame Dressing. 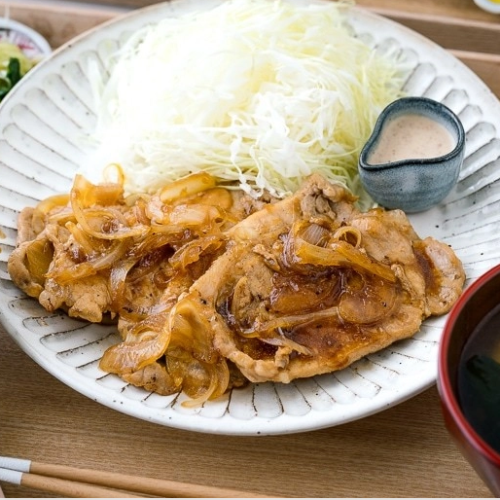 To Make the Ginger Sauce :

To Prepare the Ingredients :

To Cook the Pork :

How To Make Perfect Hollandaise Sauce !!

How to Make Tasty Norwegian Lefse !!