kunafa/kunafa/kanafa it’s the same name for an iconic popular Middle Eastern sweet dessert This delight has a buttery flavor coming from Ghee and consists of two layers. A crunchy layer of shredded phyllo dough. Which later soaked with simple syrup perfumed with rose water. The second layer is a creamy and velvety pastry cream called Ishta and it’s egg-free.this tasty buttery dessert made with shredded pastry layers enclosing a creamy soft milk pudding. Drizzled with fragrant simple syrup and adorned with crushed pistachios for a classy look.

Kunafa is a traditional Arabic dessert made from Phyllo dough filled with either pastry cream, or sweet Arabic cheese. Sometimes, the dough is shredded to make rough kunafeh (kunafa kheshneh). Other times the phyllo dough is processed in a food processer until it takes a breadcrumb-like texture, and the kunafeh made of it is called Soft kunafa or (Kunafeh naemeh).

It is served on special occasions, like Eid, the Holy month of Ramadan, and weddings. You can find Kunafeh in different variations, and it depends on which country you are having it. In Egypt, the kunafa is mainly filled with pastry cream (Ishtah). In Lebanon and Syria, the Arabic cheese or mozzarella cheese filling is popular. Nowadays, people are getting creative, and you can find it filled with nuts, chocolate, and even caramelized fruits like apples. 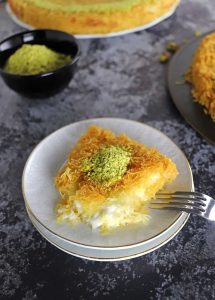 Now Kunafa comes in various different forms and its a dish that’s been around for centuries, enjoyed in numerous Arabic and middle eastern countries like Turkey. Firstly, the stuffing can be either cheese or cream (ashta). And secondly, it is made with either kataifi (the more popular version) or a semolina based dough. The semolina dough, which has a smooth texture, is referred to as Knafeh Na’ameh and it originates from the city of Nablus in Palestine.

The version in this recipe is the most classic type of kunafa, but using Mozzarella cheese instead of Akawi cheese which is typically used in Arabic countries. It’s also the easiest version so this is where you want to start!

What is Kunafa dough made of?

In Egypt kunafa dough is made my mixing flour, cornstarch, oil, water and a pinch of salt. Some people skip the cornstarch and others use semolina as well. Kunafa batter should have a consistency much like crepes or a bit runnier. The batter then is poured through a special cup with tiny holes and cooked over a big hot plate. 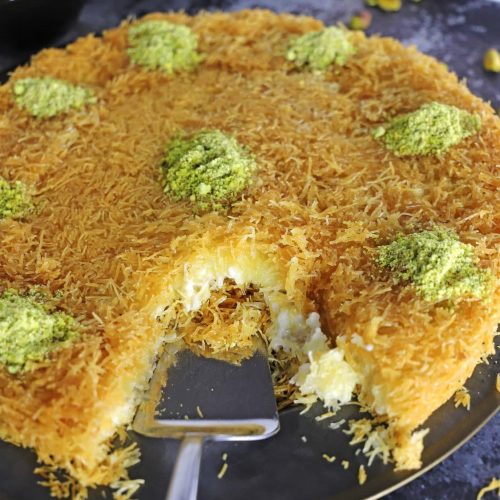 How to make turkey soup -tasty and healthy