Coquito is a Puerto Rican Coconut Eggnog is made with rum, coconut milk, sweetened condensed milk and spices. It’s delicious served very cold, with a dusting of fresh nutmeg on top.
make bottles of this every year and give away as gifts to friends and family. Bring a bottle of coquito to any holiday party and I am positive you will be invited back the next year.
You can make this Puerto Rican Coquito recipe and store it for up to a month in the fridge, but good luck making it last that long!

Ig you want to go Puerto Rican style with your eggnog, you whip up some Coquito! It’s actually referred to as “Puerto Rican Eggnog” although it doesn’t contain any eggs. Some people do add eggs, but I’m not a fan of adding them. It’s got a coconut flavor base with a little bit of spice thrown in it, and of course, rum. The name “coquito” actually translates as “little coconut.” What does it taste like? It is on the sweet side. It almost tastes like melted creamy coconut ice cream.

What’s the Difference Between Coquito and Eggnog?

Now I’m not knocking eggnog. In fact, my friend Rebecca has a killer eggnog recipe, much better than buying store-bought eggnog. But eggnog and coquito are not the same. I refer to eggnog as a drinking custard. It’s made of milk, heavy cream, sugar, and raw egg yolks that gently cook until thick and creamy. It is served chilled with some brandy, bourbon, or cognac. Coquito has coconut milk or cream of coconut and is served with white rum. Some recipes will include an egg but, I’ve already shared how I feel about the egg in coquito.

The addition of egg to coquito didn’t come until much later. Abuela once told me that the addition of egg yolk was the influence of the classic American Christmas drink eggnog. How true that is I can’t say but I continue to stand firm in the no egg yolk camp. If your abuela made it with egg yolk go for it.

Can Coquito be Made without Rum?

I believe everyone should experience the joy of coquito. It is totally fine to prepare the coquito without rum if needed. You may not drink alcohol or you may be serving minors. When making a virgin version of coquito I recommend substituting coconut milk for the rum and adding rum extract to taste.

Can You Make This Vegan?

I would recommend using almond milk or soy milk in place of the evaporated milk. As for the sweetened condensed milk, I would add 1 cup of sugar and another milk alternative to make up the volume and sweetness. Start slow with adding the sugar, and taste as you go until you reached the desired sweetness.

Anything after those basic ingredients is up to you. Like so many dishes, coquito doesn’t have an exact recipe. The type and amount of rum, the choice of spices, the type of sweetener, or even whether to use eggs or not can vary from recipe to recipe and person to person.

This means that coquito is a recipe that you shape to your taste.

Have fun, experiment, and make the recipe yours. It will quickly become part of your holiday tradition, too.

Make Ahead and Storing Tips for Coquito

You can chill this in the fridge up for as little as two hours and up to three days ahead of time. All you have to do is pull this out when it’s time to serve, and garnish with some cinnamon or grated nutmeg. You can also keep coquito indefinitely in the refrigerator since the amount of alcohol keeps it preserved. But it begins to separate and look dodgy after more than three days, which may make you nervous. It’ll still be fine, and all you have to do is shake it up to make it smooth again. 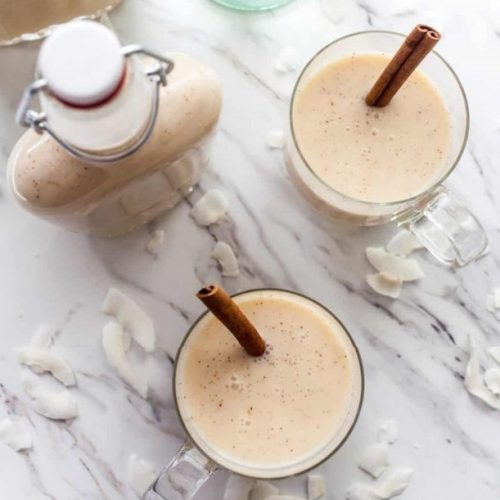 how to make Traditional Hannukah Latkes !!