chia seeds have come a long way since the days of terracotta Chia “pets.” You’ve probably seen delicious-looking puddings and smoothies made with chia seeds popping up on your Instagram feed a lot recently.

Chia seeds have even been called a superfood in recent years. Claims abound about the health benefits, including that they may help you lose weight. But can they really help shrink your waistline? Read on to find out. If you haven’t tried chia seed pudding yet, you’re in for a real (and very healthy) treat. There are so many reasons to love chia and so many ways to serve chia pudding that are guaranteed to make your mouth water.

And yes, we are talking about those same chia seeds of 1980s Chia Pet fame! Chia seeds come from a Mexican plant in the mint family.

What are chia seeds ?

Chia is actually a member of the mint family and native to Mexico. Chia seeds are consumed like whole grains, but they’re a pseudo grain. That means they’re the carbohydrate-rich seeds of a nongrass plant. When chia seeds encounter liquid, they expand and form a thick gel.

Chia seeds were said to be a staple of Aztec and Mayan diets, but were later banned because of their ritualistic religious use. Over the last century or so, they’ve enjoyed a minor following, but recently made a comeback on the market as a potential superfood.

Chia seeds are a nutritious pseudo grain that can be part of a healthy weight loss plan. But they’re not a quick fix to drop a dress size. And if you eat too many, they may have the opposite effect. No single food is ever responsible for healthy weight loss. Although some people claim to lose weight after adding chia seeds to their diet, it’s likely chia seeds were only one component of an overall healthy diet and exercise plan. And since chia seeds are tasteless unless blended with other foods or flavored liquids, some people prefer to get their calories from a more satisfying source.

Note: Chia seeds may interact with blood pressure medications or blood thinners such as warfarin. If you take any of these drugs, don’t eat chia seeds.

The nutritional power of chia :

Chia seed pudding is a super-tasty and extremely easy way to sneak healthy fats into your diet. Chia seeds are filled with omega-3 fatty acids — the good fats that promote heart and joint health and aid memory. And according to registered dietitian, Gillian Culbertson MS, RD, besides supplying heart-healthy omega-3s, chia seeds keep your blood sugar balanced and are full of minerals and antioxidants.

More pluses in this pudding :

“Chia pudding is the easiest thing you can possibly make because the basic recipe has only two ingredients — chia seeds plus any kind of milk. And what’s easier than that?” Culbertson says. With chia, there’s no cooking involved. And chia seeds absorb up to 10x their weight in liquid. Just soak them in your milk of choice and these teeny seeds transform themselves into a pudding with a consistency similar to tapioca. Sound easy enough? Then here are six tantalizing flavor variations she has created from one simple chia seed pudding recipe that are perfect as a snack, dessert or even breakfast!

(*Total calories, protein and fat will be higher if made using a higher-fat milk, as well as for flavors including chocolate and nuts.)

In a small bowl, combine your chia seeds and milk of choice. Mix well. Set in the refrigerator for at least 3 hours, but it’s best to leave chilling overnight.

When you’re ready to eat, give a quick stir. Enjoy as-is, or add any of these tempting toppings to the recipe above to create your own recipe book of delicious chia pudding flavors! Mix and match with your main meal or serve as your final dessert course! 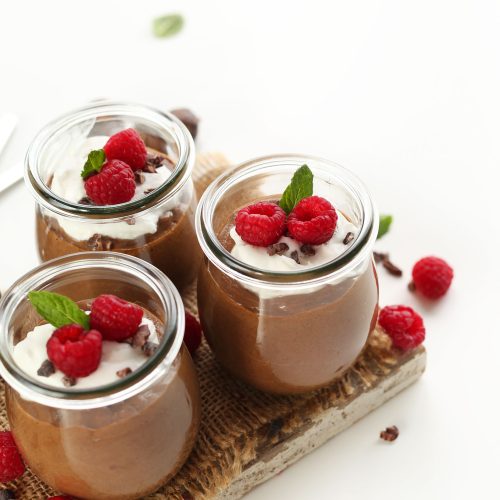 we are going to make two kinds of recipes the first in chocolate, Cheers and happy pudding making! and the second in vanilla-flavored : chia seed pudding that’s naturally sweetened and so thick and creamy. Loaded with nutrients and perfect for breakfast, a snack, or dessert!
Imprimer la recette Pin Recipe

Potatoes with Caramelized Onions and Gruyere !!!