how to make Traditional Hannukah Latkes !!

Every year a millions of Jewish families Making latkes .it is the one way in which the Hanukkah is celebrated. As a result of this, the tradition of making latkes is maintained in my family, and is typically a task that falls into the hands of my grandma. Every Hanukkah, my grandma’s latke recipe is used, whether the latkes are made by my grandma herself
The recipe is simple; first potatoes are grated and mixed with egg or some other binding ingredient, onions might be included in the mixture if desired. Afterwards, the potato mixture is formed into small circular pancake-like shapes. Finally, the pancakes are fried in oil until hot and crispy. Latkes are typically eaten dipped in sour cream or applesauce. Making latkes is a Jewish tradition that has been passed down for centuries, and has found itself in my family.
they are golden brown ,crispy adsometimes chewy when mom’s add shedred cheese.

While the traditional way to serve latkes is with sour cream and applesauce, hot from the pan, if you want to stray from tradition, these crispy potato cakes are very versatile. Top heated leftover latkes with cooked greens and a fried egg with a dash of hot sauce, or a slice of fresh tomato and some lox. 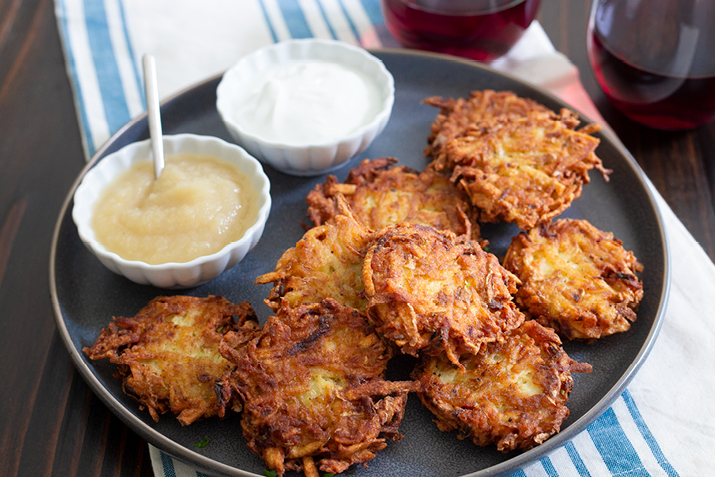 How to Make A Traditional Hannukah Latkes !!

This is one of the most famous of Jewish foods and a specialty of Hanukkah. The latkes are served as an appetizer, as a side dish, and even for tea with a sprinkling of confectioners’ sugar. They can be marvelous if properly prepared, just before eating.
Imprimer la recette Pin Recipe

HOW TO PREPARE NORWEGIAN WAFFLES?