Birria is a Mexican dish from the state of Michoacan. The Spanish term “birria” is used to describe intangible things without value or quality but in terms of gastronomy it is just an extraordinary combination of two meats creates the best balance of tender texture (from the chuck roast) and succulence ( from the short ribs).If you are looking for a super easy birria tacos recipe, you might be disappointed – this dish is inherently a bit of a labor of love. BUT I have tried to make mine as straightforward and streamlined as possible, while still staying true to the original flavors of the dish.

What are Birria Tacos?

Birria tacos, if you haven’t heard of them yet all over social media and the internet, is traditionally an addictive sweet, sour, slightly spicy, and utterly savory Mexican beef stew that’s slow cooked until the beef is tender and fall-apart juicy and delicious. Someone had the bright idea to stuff this beefy goodness into a taco shell, and then dip the whole mess into the stew and fry it up. They blew up after that, and the rest is history. But unlike most fad foods, Birria tacos are so good you’ll be making them every week.

Birria tacos / quesabirria tacos are originally from the Jalisco state of Mexico, and they have a rich history! In the 16th Century, the Spanish brought all kinds of animals with them to Mexico, including goats.

The goats began taking over the region, and unlike pigs and cows, which were highly desirable for both their meat and byproducts like milk, goats were not so loved. They destroyed crops and multiplied quickly, plus the meat can be stringy and very gamey, but necessity lead to their consumption. The residents adapted to cook the meat for extended periods of time to tenderize it, and added heavy spices to mask the gamey flavor.

what are birria tacos made of?

Traditionally they are corn tortillas filled with goat meat! ( Scroll down to learn the history of this – it’s pretty cool ). They can be made with whatever goat, beef, pork, or lamb you can get your hands on though. I like a mixture of goat and beef. 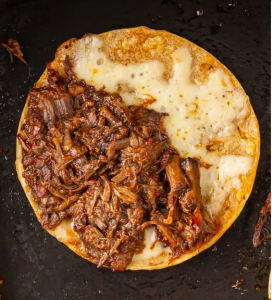 I’ve had these tacos made a ton of different ways, and the places I’ve been have served everything from a thin beef dipping sauce to a thicker blended style sauce. I prefer the thicker style that clings to the tacos a little more ( and has a TON of flavor packed into it.)

What to serve with Birria Tacos?

These birria tacos are good enough to eat dozens on their own. If you wanted to do a side though, you can serve them up with homemade tortilla chips, mexican rice, and you even have all the ingredients necessary to make a birria tortilla soup. Or my current personal favorite: Birria ramen.

How to make Birria Stew

How to make Birria Tacos

Once you have the stew, making the tacos is super easy: 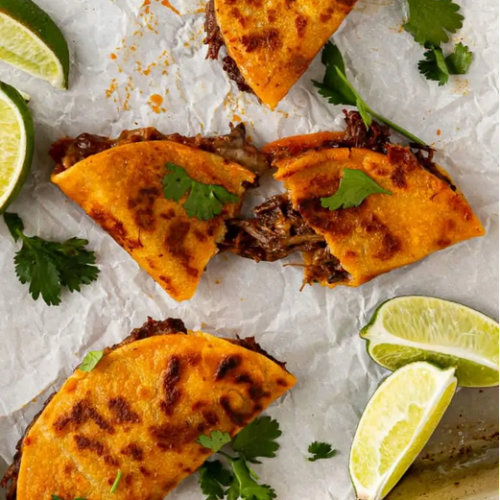 Crispy, meaty, and optionally cheesy, this Birria Tacos recipe will save you the long waits at the shop, and freezes beautifully to have again later. ( if you add cheese, it's a quesabirria taco and I HIGHLY recommend it)
Imprimer la recette Pin Recipe

Instructions To Make the Birria (Meat Filling) on the Stove Top:

Instructions To Make the Tacos: