Today I’m going to present you the best guide to making the most delicious bulgogi (Korean BBQ beef) at home! With this, you can make mildly sweet, savory, smoky, juicy and tender delicious bulgogi. Are you excited?

Undoubtedly it is one of the most well-known Korean traditional foods and it has been around for thousands of years. Naturally, the cooking method of bulgogi evolved over time and it varies by region too.

However, to narrow our focus down, we will be talking about the most common way of making beef bulgogi in modern times.

Bulgogi literally means “fire” and “meat” and is traditionally grilled on a barbecue or on a stove-top griddle.  Modern interpretations, however, often cook Bulgogi in a screaming hot cast iron or stainless steal skillet so the edges caramelize like they would on a grill.

WHAT KIND OF MEAT DO YOU USE FOR BEEF BULGOGI?

Bulgogi is typically made with almost paper-thin slices of the most tender cuts of beef. Rib-eye is the most common cut of beef with top sirloin or beef tenderloin coming in a close second. Scotch fillet / rib eye is known to have more flavor and juicy texture than other steak cuts. It also has a good amount of marbling, so cooking it over a grill or pan frying is quite suitable for this cut.

WHAT IS BULGOGI SAUCE MADE OF?

Bulgogi sauce is intensely flavorful and irresistible.  It is a soy based marinade/sauce flavored with ginger, garlic, sesame and Asian pear (more on pear below).  Brown sugar is added for sweetness as well as sweet rice cooking wine.  I’ve also added Gochuchang to the Beef Bulgogi marinade for a subtle sweet heat and dimension of flavor.

WHAT IS GOCHUJANG AND WHERE CAN I BUY IT?

Gochujang is a Korean BBQ Sauce that’s the perfect blend of savory, sweet and spicy and one of my absolute favorite Asian condiments.  By adding it to the marinade, the resulting beef Bulgogi isn’t spicy at all, by our standards, but boasts fabulous dynamic flavors.

HOW LONG TO DO YOU MARINATE BULGOGI?

If you choose to use flank steak or skirt steak, I suggest marinating the beef longer because these are tougher meats to start with.  I would marinate flanks and skirt steak for at least 2 hours but overnight is best.

If you are using rib-eye or top sirloin, you can get away with marinating for as little as a 30-minutes at room temperature, but 2-3 hours in the refrigerator is optimal.  The meat is sliced so thinly and it’s already so tender so you don’t need much more than 3 hours, but you are welcome to marinate longer.

WHAT TO SERVE WITH :

Serve the bulgogi with some steamed Korean rice and with other Korean side dishes. You can also use some lettuce leaves and perilla leaves to wrap the bulgogi. Don’t forget to pair it with some Korean ssamjang (Korean bbq dipping sauce) and some kimchi (spicy or non-spicy) too! 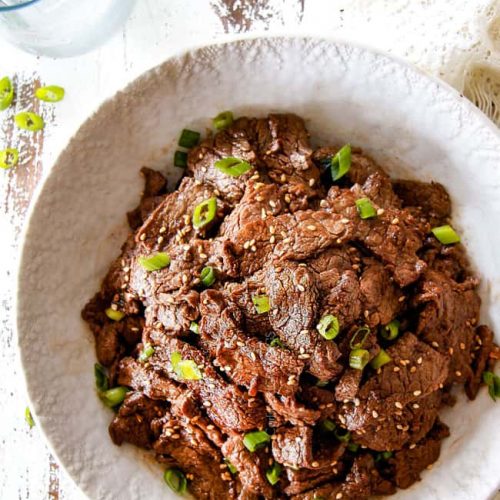 Korean BBQ beef, bulgogi, is very easy to make at home with a few basic ingredients, and the thinly sliced beef doesn’t take long to marinate. This bulgogi recipe shows you everything you need to know about how to make the best bulgogi!
Imprimer la recette Pin Recipe