Giblet gravy, a gravy made with the choicest pieces of the bird, is the queen of gravies. So full of wonderful flavor from the giblets and drippings.
Making good gravy isn’t difficult! It just takes patience, perseverance and good choice of ingredients witout forgeting using the neck, liver, heart, and gizzards from a turkey or chicken.

Giblets are comprised of the heart, gizzard, liver, and neck of the chicken or turkey. They are often found in a small bundle inside the cavity of the whole bird. You can make gravy from the giblets of either a turkey or a chicken, though I think it’s more usual with a roast turkey. The giblets are bigger, and there’s more meat to put in the gravy.

How to Make Giblet Gravy

To make the gravy, you first make a stock from the giblets, which cooks on the stovetop while you are cooking your turkey. When the bird has finished roasting, you combine the stock, along with chopped up cooked giblets, with the roasting pan drippings to make the gravy. You can also make giblet gravy with a few hard boiled eggs and 3 tablespoons of chopped pimentos thrown in. Do you make giblet gravy? If you do, what are your variations? Please let us know in the comments.

Make Ahead Tips for Giblet Gravy

How to Make This Gravy Gluten Free

Make this gravy gluten free simply by choosing cornstarch as the thickener instead of flour, following the optional directions in Step 5. Just be sure to first mix the cornstarch with water to make a slurry, rather than adding dry cornstarch straight to the drippings. 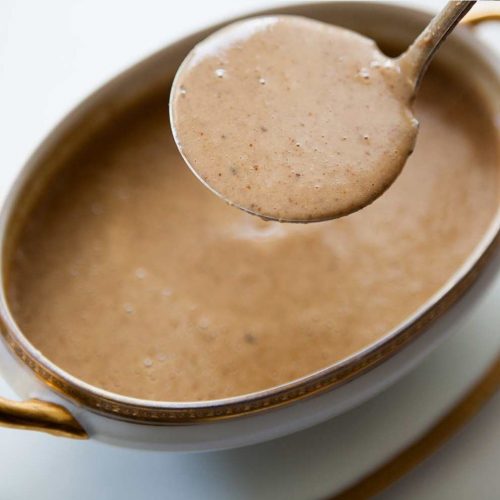 Basic quiche recipes-using any garnish of your choice...