Corn Chowder is creamy, comforting and full of flavor! Made with an abundance of fresh sweet corn, tender potatoes,Truly this chowder is too hard to resist and can be enjoyed all time long !

Don’t we all crave this time of year? Not only do we get those relaxing beach days, backyard cookouts, and weekend hikes to soak up that summer sun but it also means getting some of the best food of the year while all the fresh produce is in season.

It’s that time of year where you’ll find fresh corn on the cob galore, especially if you’re in the U.S. near the plethora of local growers. If you’re like us you’re likely eating it multiple times throughout the week and looking for more ways to use it and this corn chowder is one of the best ways to put it to good use!

It has everything you’d want in a corn chowder and then some. Nothing fancy, just tasty homestyle comfort food at its best!

How to Make a Thicker Corn Chowder

For a heartier soup, add an extra potato. Or, before serving the chowder, mash it with a potato masher to give it a thick-but-chunky texture. You could also pulse it with an immersion blender. For a smoother texture, puree about a third of the chowder in a bender or food processor.

What to Serve With Corn Chowder

You can’t go wrong with crusty bread and a simple green salad. For something more substantial, grill a few chicken breasts

Can I Use Frozen Corn?

Key to the best corn chowder is to use the best corn on the cob you can find. It is the prominent flavor here after all and most important part of this soup. If your only option is frozen corn then yes it will work and it will make it easy, but when you have access to fresh corn use that for best results.

CAN YOU FREEZE CORN CHOWDER?

I love freezing soups, but due to the dairy and potatoes in this one, I don’t recommend freezing it as is.  If you REALLY want to try it, here’s what I would try:

CAN CORN CHOWDER BE MADE IN THE SLOW COOKER?

Absolutely!  I get it, some days the last thing you want to do is stand by the stove for 30 minutes.  On those days, the slow cooker is my best friend!  Slow cooker directions are listed below the recipe.

CAN YOU ADD CHICKEN OR CHEESE TO THIS CORN CHOWDER?

Sure can!  Sometimes I add about a cup or so of shredded cheddar cheese to the soup, or add a sprinkling of cheese when serving.  Chicken is also a fabulous addition! 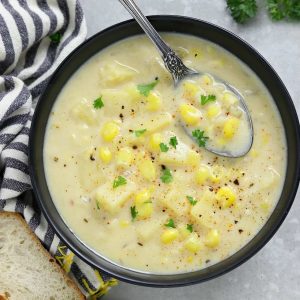 Corn Chowder is creamy, comforting and full of flavor! Made with an abundance of fresh sweet corn, tender potatoes,Truly this chowder is too hard to resist and can be enjoyed all time long !
Imprimer la recette Pin Recipe

Frozen-Corn Variation
If you want to use frozen corn, puree two cups of it with the milk as directed above, and add the remaining two cups to the soup along with the puree. Since the corn is already cooked, it might toughen if it goes in earlier. You could add a pinch of sugar, too.

How to Make Royal Icing !!

How to Build A Perfect Cheese Board