Pandesal or pan de sal is a variety of bread in the Philippines. It is sold in the form of small balls of individual bread, soft and slightly sweet. Traditionally, pandesal is made with white flour, yeast, water, shortening, sugar and salt. It is soft and airy and slightly sweet. Normally eaten as a sandwich with one’s favorite filling.vI introduce you to one my favorites- pandesal (also commonly spelled as pan de sal). Pandesal is the quintessential bread roll of the Philippines.

They look very similar to dinner rolls like Parker House rolls. However, the main difference, being that pan de sal is pretty much served anytime of day except during dinner.

A traditional Filipino breakfast roll, that used to be sold only in early hours at bakeries or on the streets by vendors on bicycles with loud air horns. They would put the Pandesals in a big insulated box to keep them warm. But, nowadays, some bakeries make them available for the entire day.

It is called Pandesal or Pan de Sal (Spanish) that translates to salted bread although it is actually sweeter than salty. It is soft and fluffy and covered with breadcrumbs.

This is because the famous bread originated from a need to turn to innovation when early Filipino bakers were looking for a cheaper option for flour. Pandesal, in turn, was originally made from wheat flour. Additionally, American wheat soon became more affordable than rice in the 1900s. And so this bread and other recipes that largely made use of wheat grew in popularity.

Commercial yeast, canned dairy, and baking pans also became cheaper to produce. This is because of the massive population of American immigrants in the earlier part of the 20th century. This only helped increase the demand for pandesal. 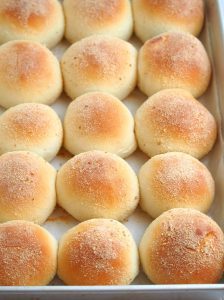 Don’t Mix Salt and Yeast Together

Almost every recipe for yeast dough contains salt, which gives a taste to the dough. The problem is, salt kills the yeast. So how should these two ingredients be used in one recipe? Well, make sure the salt does not come in direct contact with the yeast. Note that many recipes tell you to add the salt to the dough only after the initial mix of the other ingredients, and the salt does not touch it directly. Contrary to salt, Yeast loves Sugar which helps to accelerate their growth. The heart wants what the heart wants 🙂

Lose Patience In The Final Stages Of Molding The Bread

Bread needs time invested in its molding, otherwise, all the work and care you put into making the dough will not have the desired results. If you break at this stage or think its less important, and decide that “it’s not that important, I will just roll the dough into a ball and it will come out nicely” you will end up with a flat and dense loaf.

Did Your Dough Have Enough Time To Rise?

If you slice the loaf and see that that the dough appears to be compressed, especially around the edges it means you should have let it rise longer. baking bread is about the experience, not so much as following a recipe to the dot. make sure to put the dough for a rise in warm space and keep an eye on the timing. Most bread needs a couple of proofs before ready to mold and then another final proof again before bake.

A great tool for the home baker is a proofing box. It is essentially an enclosure that has a heating element and creates humidity with a water chamber. To read more about how a proofing box works and how it can improve your bread and cut down on time.

Now… Baking at home differs from baking in an industrial bakery. The tools are different in a way that affects the dough. A home mixer will not give the same result as an industrial mixer, so it is difficult to achieve stable airiness in all the dough. In most cases, the dough will be airy in some parts and lumpy in others, so after the first rise, it is recommended to knead the dough again for a few minutes and then let the dough rise again until it doubles itself and becomes easy to work with. Yes, that means more work but the airy results will be worth it.

Lastly, note that you could potentially let the dough rise too long as well. I know, I know, it’s getting confusing. If the dough has sat around for too long after rising the dough becomes what we call in the industry “OLD” and it loses its power to rise in the oven at bake. If your dough is old you will find that you do have some airiness in your bread but it is much smaller than it should be and not as fluffy.

5 Best Tips For The Fluffiest Bread You Ever Tasted

It’s tempting to use All-purpose flour, you probably already have in the kitchen and you use it for all your other baking needs like cookies, cakes ex. However, it’s impotent to note it has a lower protein content as compared to bread flour: the high protein in bread flour helps to create more gluten and rise in your baked bread, producing a lighter and fluffier loaf.

Adding some gluten can help, especially with more whole-grain types of bread. Rye flour has less gluten than regular flour, and naturally, rye bread should be denser, but if you want to enjoy both worlds: healthy rye bread on one side and enjoy an airy bread on the other, it is recommended to combine two types of flour: rye flour and white flour and in this case adding some gluten contributes to the airiness of the bread.

3. Warm or Room Temperature Water For Yeast Will Make It Work For You

Yeast reacts differently to variable temperature. Ten degrees difference in the temperature of the dough profoundly affects the growth rate of yeast. proofing the yeast with warm water (not hotter than 110 degrees so as not to kill the yeast) and keeping the mixing bowl worm really helps. it gets the yeast working toward a perfect rise. Basically, you want all of your ingredients and tools to be at room temperature. If you have your flout sitting in the fridge make sure to take it out about 30-45 min before you start making your bread mix. This goes for any other ingredients you might use in your bread.

So how does it work? its simple biology. the yeast cells are a living organism and like any organism they will metabolize the simple sugars they interact with, releasing gases into the bread dough, giving your bread rise.
The longer the yeast is allowed to work, the more gas is created which helps to create air bubbles in the loaves- the same air bubbles that make it airy and fluffy.

4. The Windowpane Test – a Technique Every Beginner Baker Should Know

This technique is the best way to figure out if you sufficiently kneaded your bread dough. Insufficient kneading will result in underdeveloped gluten, creating a bread dense as a brick.
To be on the safe side take a small piece of the dough (a bit bigger than a golf or ping pong ball ) and hold it between your thumb and first two fingers gently start to stretch out the dough rotating it in a circular motion in order to stretch it around evenly. Once you have your dough thin enough that you can see light go through you know your bread is kneaded enough and you can start the proofing stage. If your dough rips during this test and you don’t get a good stretch out of your dough you will have to keep kneading it until you get the desired result.

Measuring Cups OUT Scale IN  :

Measuring cups seem like an easy way to portion your ingredients but is it inaccurate. Remember, baking is a science and should be exact. There is too much room for error with measuring cups. You could have air pockets in the ingredient ( this is common with flour mostly ) while you pour it in the cup and you want to be able to tell that you do not have the correct amount. The best way to ensure you have the correct proportions in your ingredients is to use a scale. This is your starting point and if you get this wrong nothing else will be right in your bread so go out and get yourself a scale and throw away those measuring cups. 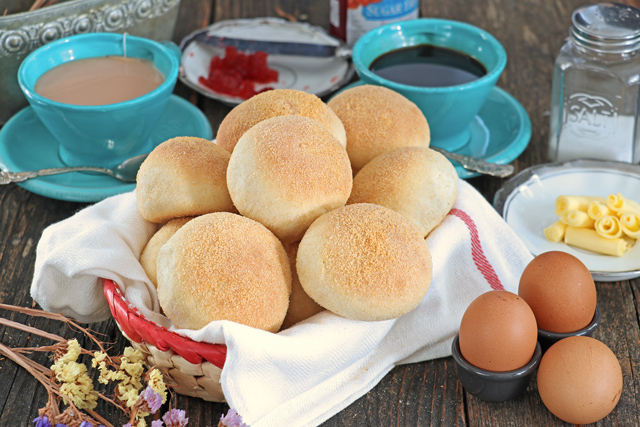 Pandesal is the quintessential bread roll of the Philippines. The slightly sweet bread is soft and fluffy. It's best enjoyed with salty cheese or peanut butter.
Imprimer la recette Pin Recipe

How to know if the bread dough has been adequately kneaded

Why doesn’t the breadcrumb stick to the dough?

Some Frequent Questions With Their Answers :