Couscous, like tagine, is a traditional dish emblematic of the Maghreb countries (Tunisia, Morocco, Algeria, Libya, Mauritania and Western Sahara). In fact, durum wheat semolina is the staple food of these countries. It is different from soft wheat, also called « wheat », which is used for making bread, pizza, etc. And the term « couscous » refers to both the semolina (once steamed) and the whole dish.

The origin of couscous is often attributed by historians to the indigenous ethnic people of North Africa. the word « couscous » can also be pronounced « k’seksu » (or « seksu ». Subsequently, this dish spread around the world, starting with the Mediterranean countries.
The couscous dish is part of everyday dishes, but can also be eaten on special occasions (weddings, religious ceremonies, birth, offerings, circumcision, death, etc.). Especially during Eid el-Kebir which means « feast of sacrifice » or « great feast ». But be careful, do not confuse it with Eid al-Fitr which means « little party » and which marks the end of Ramadan.

It also has a very strong symbolism, because it is a dish of sharing and solidarity. Thus, we gladly meet around a good couscous to strengthen friendships, alliances or to show hospitality and generosity.

THE PREPARATION OF COUSCOUS :

The preparation of this dish, as well as the choice of ingredients depend on climates and regions, but also on the purchasing power of each family. Thus, we have couscous from cities, couscous from the mountains, couscous from the rich, couscous from the poor, etc. For example, in the desert, where fresh vegetables are scarce, couscous is made with salted and dried meat. In the Mediterranean basin, it is readily prepared with fish. Or, in poor families, we eat more couscous with vegetables, because the meat is too expensive in the Maghreb regions.

kinds And Variations of couscous :

The preparation of couscous takes on an almost ceremonial character in the Maghreb families. In fact, the semolina undergoes different stages of preparation and cooking before being presented to the table.

The history of couscous also teaches us that before, barley semolina was used to prepare couscous. But alas, its preparation was too complicated and too long. Therefore, it was replaced with durum wheat semolina which is much more convenient. Moreover, in Western countries, there are already pre-cooked semolina. Which is a heresy for the Eastern countries where the preparation of couscous is imperatively done in an artisanal way. That is, the grains were crushed with stone grinders and dried in the open air. Next, groups of women set about preparing the semolina with a mixture of water and flour and making dumplings for better preservation. Later, before cooking it, they passed the semolina through a sieve and worked it with their hands and a little salted water in large basins (« gessra »). And finally, they cooked it in the top of the couscoussier thanks to the steam of the broth. Indeed, the latter was downstairs and contained meat and vegetables.

The peculiarity of the preparation of this dish also lies in the very particular kitchen utensil that we use: the couscoussier. The latter is a kind of large metal pot (aluminum or stainless steel). It has 2 parts: on the one hand, the “steam basket” above to cook the semolina and on the other hand, the “large pot” at the bottom which is used to cook the broth as well as the meat and the vegetables. . In fact, this is the best way to cook semolina, because it will soak up the aromas of the broth. In addition, the steam will make it swell and make it light and more digestible. Moreover, to make the most of this steam, the Maghrebian housewife sealed the 2 parts either with a cloth soaked in water and flour, or with a plastic bag, or again with a kind of rubber seal. .
Note that the first couscoussiers were earthenware dishes with large holes or baskets of wickerwork. They were placed in large pots of boiling water so that the steam would cook the semolina. Nowadays, they are more of metal. And it would be inconceivable for any self-respecting North African family not to have this utensil at home.

Just one cup of couscous contains over half your daily recommended intake of selenium, a powerful antioxidant that helps fight inflammation and bad LDL cholesterol levels in the body. Couscous is also a good source of fiber, with one cup supplying almost 10 percent of your daily recommended intake, but you’ll want to make sure you’re pairing it with plenty of other fiber-rich foods as well. To get the most bang for your buck nutritionally, opt for whole-wheat couscous. 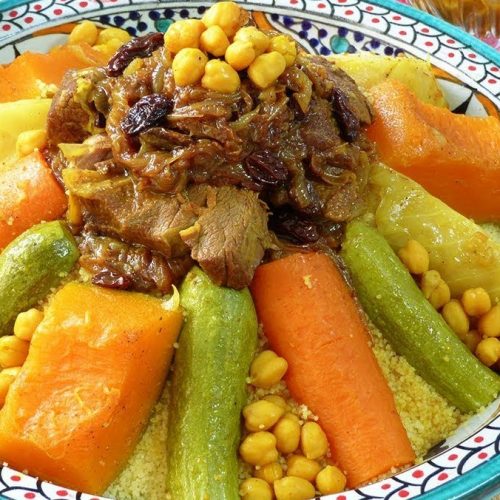 The traditional preparation of semolina :