Lamingtons is one of Australia’s most signature desserts made from a sponge cake covered in chocolate and coconut. A treat for gourmets who will find here a simple recipe to prepare them.
Despite its remoteness, Australia is increasingly present in all cultures of the world. In addition to many local products that are gradually being found in many supermarkets, there is a typical dessert that we want to present to you today: the Lamingtons. A few square cookies covered with chocolate and coconut that will not leave anyone indifferent. Take note of these simple steps to prepare them:

We will prepare the mold where we will bake the cake that makes up the lamingtons. The measurements indicated are for a more or less square mold that does not exceed 23 cm in length. We will grease it well with a pinch of butter and we will also place baking paper to facilitate its removal after the mold. 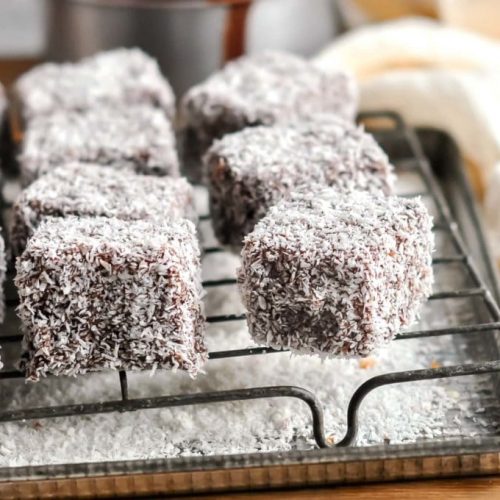 The lamington is a modest square-shaped sponge dipped in chocolate and coated with desiccated coconut. Other variations include two layers and a cream or jam filling – seen by many as a vital addition. They go perfectly with a nice cup of bush tea, or maybe one of Melbourne’s world-famous coffees, and are available in all good bakeries and cafes.Although the cake is thought to have been first served in Toowoomba, the national success has seen it take off in cities across Australia.
Imprimer la recette Pin Recipe