A crisp is a baked fruit dessert topped with a crisp and crunchy layer of ingredients. The topping may include a proportion of sugar, butter, oats, nuts, flour and a spice such as cinnamon, tossed together to gain a somewhat granular look. The dessert is baked just until the topping is crisp and golden. » A true classic Fall dessert, this easy apple crisp recipe is reminiscent of generations past.  Pop this apple crisp in the oven and wait for the delicious smell to waft through your house!

What apples do I use for this easy apple crisp

Simply put, you can use any apples that you like!  My personal favorite for this recipe is the golden delicious variety, but Granny Smith or Fugi are some other great varieties.

To peel, or not to peel

It’s 100% up to you!  I’ve made this recipe both ways, and I like them both equally.  Generally, when I make this easy apple crisp, I’m making it for my family, and my kids wouldn’t eat it with the skins on, so I peel them more often than not.  I’m sure this goes without saying, but if you choose to leave the skins on, be sure to wash the apples thoroughly 🙂

How To Make Your Crumble Topping Crunchy

It might sound obvious, but the value of using a tried and tested recipe can’t be underestimated, at least when it comes to the basis of the crumble topping, i.e. the butter and flour ratio.

The Use Of Oats

A common addition to a standard crumble topping is porridge oats, which somehow give a nice delicate softness but also add crunch once cooked in the oven. Using other breakfast cereals could also be an idea.

Combining all your ingredients together in a nicely dispersed fashion will ensure an even distribution of the topping and therefore a consistent crunch.

All ovens vary, but our research suggests setting the temperature of yours between 160 – 200 degrees Celsius for the best crumble dessert.

Naturally, the other elements of a good crumble topping need to be spot-on too, but if you use Demerara sugar, either in your crumble mix, or at the very least, by sprinkling over the topping before going into the oven, then your crumble should be much crunchier.

How Do You Keep Crumble Topping Crisp?

There’s no two ways about it, keeping a crumble topping crisp (after it’s been cooked and then cooled down) isn’t easy, and reheating the thing in the oven is probably the only way to go. It helps if you’ve crisped it up nicely the first time around by using a sufficient amount of butter.

Does Apple Crumble Need To Be Refrigerated?

It can be tempting to leave your apple crumble out overnight when you think that’ll help keep it crisp and crunchy, but it probably won’t, and you’ll run the risk of allowing bacteria to grow faster in your dessert. Refrigerating your crumble is usually best to protect its quality and prolong its life.

Is it OK to Reheat Apple Crumble?

It’s perfectly ok to reheat apple crumble. For best results, use an oven for approximately 10-15 minutes at a reasonably high temperature (around 180-200 degrees Celsius), although microwaves can do the trick too.

How Long Does Apple Crumble Last?

Assuming it’s been refrigerated at a suitably low temperature and the ingredients are reasonably fresh, apple crumble should last somewhere between 3-5 days, although clearly, it’ll taste at its best the sooner it’s demolished. 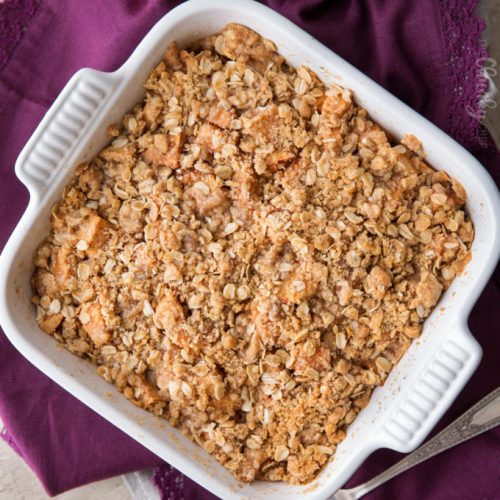 This easy apple crisp is made the old fashioned way like Grandma used to make, and is perfect with a scoop of vanilla ice cream and salted caramel sauce!
Imprimer la recette Pin Recipe